Did you know dolphins have culture and language? Bottlenose dolphins babysit the children from their neighbors in the Atlantic spotted dolphin community? They use tools, recognize themselves in mirrors, and have a brain to body ratio second only to humans? Research of their culture, society and communication is providing astonishing new results with the help of innovative technology.

In her 2013 TED talk, Denise Herzing spoke about her 28 years of dolphin research in the Bahamas (see video). Three generations of Atlantic spotted dolphins – dolphins can live into their 50s – live together in a close community in the crystal clear Caribbean waters where she’s been visiting yearly to live among them. Herzing’s work involved the use of underwater interfaces like large keyboards to allow the dolphins to convey simple messages to researchers. A recent collaboration with Georgia Tech produced a wearable dive-computer called CHAT – the Cetacean Hearing and Telemetry device which sends and receives sound messages between dolphins and researchers in real time. 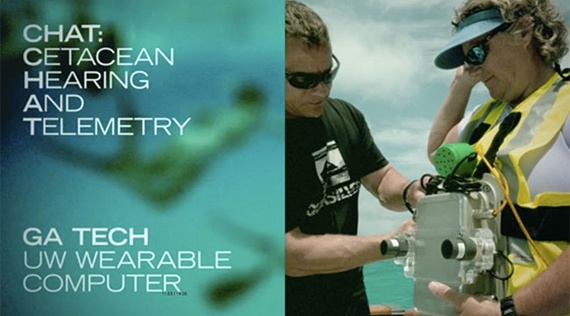 Decades of dolphin research focused on studying their communication sounds: They are able to easily associate symbols, sounds and objects. New technology is deepening the understanding of dolphin language even more. A breakthrough new instrument called a Cymascope creates sound-pictures which may better represent how dolphins see and understand their realm with super-human senses. The instrument “reveals detailed structures within sounds, allowing their architecture to be studied pictorially“. The results are “reproducible patterns that are expected to form the basis of a lexicon of dolphin language, each pattern representing a dolphin ‘picture word’.” 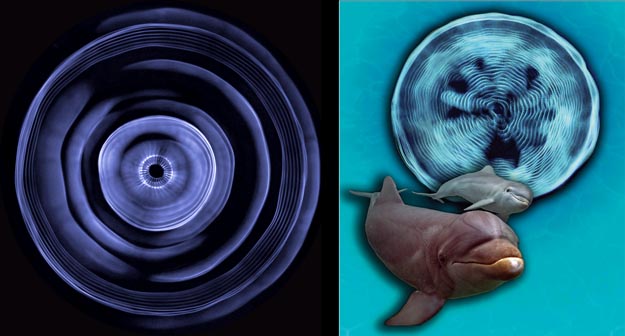 Human vision allows us to see the external visual appearances of an object; but consider the ability to simultaneously see internal structures, organs and functions. Technology which grants these abilities to humans is in its infancy, but to dolphins the world naturally has this inherent depth and complexity. If dolphin language is a simultaneous blend of vision and sound, the emerging field Cymatics could dramatically help to develop comprehensive understanding not only of their sono-visual language but also of their culture.

One day the dolphin-human Rosetta Stone will be discovered through the use of these new technologies and inter-species communication will enter a new realm. Think of the implications for advancing animal welfare, rights or animal sciences while able to communicate directly with the animals themselves.