Franco was a rescued ex-pet Vervet Monkey undergoing rehabilitation at the Darwin Primate Group (DPG) sanctuary in the Western Cape, South Africa when he was confiscated by Cape Nature; the provincial “wildlife authorities”. While in his temporary housing at Tenikwa Wildlife Awareness Center, he was murdered by Tenikwa staff, allegedly after an incident when a negligent staff member precipitated the conditions for Franco to bite an assisting volunteer who was helping clean his tiny and grossly inadequate cage –  according to Karin Saks, Director of the Darwin Primate Group, it was a former parrot cage complex, an obviously unsuitable remnant from the Freeman’s questionable past in commercial wildlife breeding but nonetheless it was where Franco and his troop had to live until suitable quarters could be built and while their fates hung in the balance during Cape Nature’s tediously drawn out deliberation.

Not surprisingly, blame for the incident was placed squarely on Franco; quite predictably not on the persistent human negligence that directly caused Franco’s high stress levels and his urgent and repeated escape attempts. After meeting the Freemans it’s my opinion that neither of them have the moral character nor the integrity required to take responsibility for their lack of due diligence in the care of Franco and the rest of his cohort. Ultimately is was their negligence and the negligence of their immediate staff that caused his death and it had little to do with his “attack” of a volunteer. How would I support this assertion? It’s rather elementary as I became his primary caretaker for the several months leading up to his death – Tenikwa killed him mere weeks after I left. 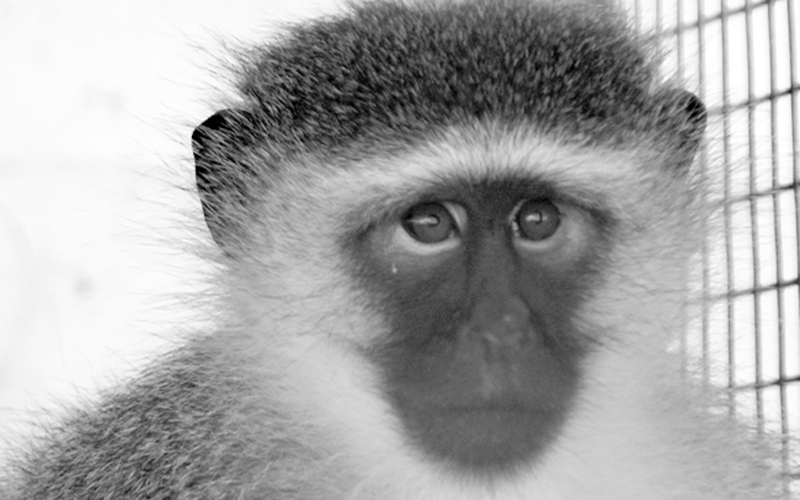 Franco was often visibly frustrated with his captivity situation. He needed special care that was not provided by the wildlife centre.

Put simply – and suffice it to say – by holding an adult male Vervet Monkey in a small four foot by eight foot (approximately) steel and brick cage (completely unnatural and frankly disgusting at best) in unfamiliar surroundings, punctuating his life with disturbances from other wildlife species (including hearing leopards and cheetah in the near distance), surrounding him with other monkeys he doesn’t want to be around, add strange humans he doesn’t know to add more stress…all set him up to fail perfectly. You couldn’t write a better plot to ensure his conditions stressed him to the point he would act out whenever possible. 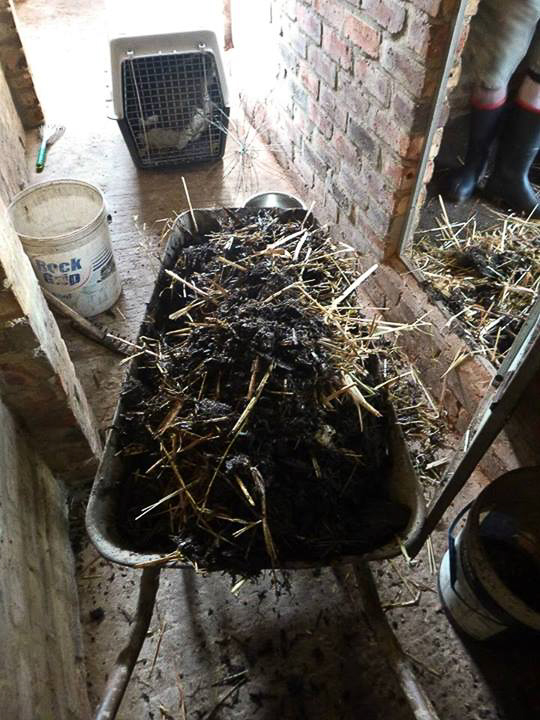 Three wheel-barrels of shit, straw and food waste cleaned from Franco’s cage. He lived in these conditions for at least a month until I stepped in as his primary caretaker.

To make matters worse; after Franco’s second attack on Karin Saks she outright refused to have anything to do with his care and upkeep, even after she had taken such great pains to protect Franco from the authorities for years; and it was Karin herself who would hammer home the final nail in his coffin as her cowardice took hold and she became Tenikwa’s indentured servant. After six months of working directly with Karin I completely understand Franco’s dislike for her. 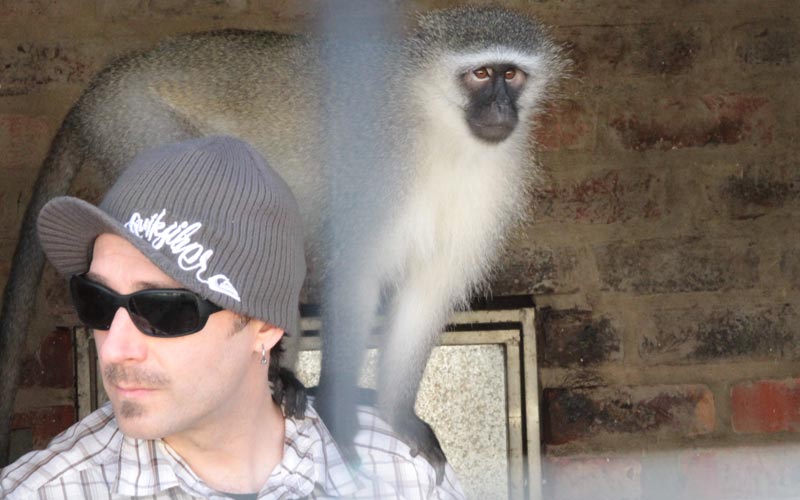 Franco was calm and predictable in the right company.

Franco’s cage was toxic. I couldn’t allow him to live in such squalor. We had already established a connection prior to his relocation but I had never been in direct contact with him, so I put a lot of faith into the bond we were nurturing when I entered his cage for the first time. It went much better than expected, and over the months to come Franco and I worked out an inspiring friendship. He loved to groom me, and would inspect and lip-smack at me from mere inches away from my face. He would sprawl out on my lap and ask to be groomed along his flank, or belly and back and enjoyed having the sides of his face tickled.

Tenikwa’s owner Mandy Freeman, as quoted from their laughable damage control public relations statement after the theoretical volunteer incident, enjoys using impotent soft language such as “euthanasia” to describe Franco’s premeditated murder in hopes the public will be more receptive and it probably worked to an extent, because there’s no way for the public to know any better. That is exactly why I’m writing this post.

“These attacks were fully under his control, quite unemotional in character, often entirely unprovoked.” ~ Mandy Freeman

“Unemotional” & “Unprovoked” – really? Normally, to say that would be to say you’ve never met Franco or have little to no understanding of animal behavior or psychology.  In this instance it is complete and utter bullshit from the Freemans. With a veterinarian and primatologist like Dr. Braum around, there is no possible way Franco’s emotional state could have been missed by anyone with half a brain and who spent more than five minutes watching him in his cage. Franco was the only monkey I’ve ever met who was visibly frustrated and quite confused about his identity – raised as a human child – then abandoned to live with monkeys.  It was painfully obvious that he was in-between worlds and absolutely needed special considerations. Tenikwa staff placed him somewhere completely unsuitable and then ignored his requirements and issues even as they worsened – then further penalized him for failing. Franco desperately needed smart management – which is obviously in short supply at Tenikwa, considering their current feather-brained Manager, penguin expert Jared Harding.

In simple rhetoric; if you kept me in a small, shit filled cage I’d probably want to bite your face off too. Mandy Freeman’s transparent quote above betrays the accepted level of incompetence at the facility and specifically when it comes to primates. Unfortunately for them, my bullshit radar is finely calibrated and I have no issue speaking about the events there. 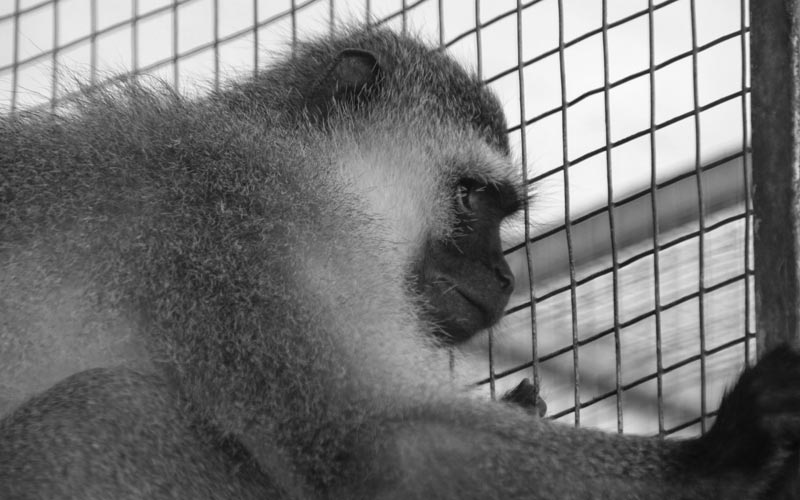 What the public doesn’t know, and what Karin Saks and Tenikwa would surely love to prevent them finding out is that Franco actually liked some people – all it took was the right type of handing and the cultivation of a solid relationship before getting into closed quarters where things can go wrong quickly for all sorts of random reasons. Franco’s former caretaker Steve Greensmith had an awesome relationship with Franco, who often slept in Steve’s bed, cuddled up with him on cold nights. But very few people were willing to put that required time in to help him learn and improve his behavior.

I truly hope the public learns Tenikwa’s and Sak’s public posturing is designed to save face and nothing more. Tenikwa is first and foremost a commercial animal exhibit and they will do everything possible to protect their profits above all. Calling them an “awareness center” is nothing but a marketing gimmick meant to hide their own lack of awareness. The fact they even run a non-profit wildlife operation is suspicious – more likely a tax shelter than done out of genuine care for wildlife. One need only look as far as how they treat their own animals – threatening repeatedly to shoot one of their own rescue dogs rather than give him adequate training – to see where their thinly veiled priorities lay.

Franco did not like Karin or Tenikwa’s caretakers, nor did he like most others who interrupted his unbearable confinement and if he had to go through them to escape he absolutely would have. I knew what to expect from Franco – that’s why it continued to work for me. When Franco interacted with people he respected and was on good terms with, he was predictable and friendly. You only need to see the photos in the linked Flickr album to see outright that with his friends he was gentle, attentive, caring and totally restrained and not the character Tenikwa’s and Saks’ public statements made him out to be. Often, when cleaning out Franco’s cage I had to leave the door open to shuffle buckets of waste out the small door to Anna while she shuffled buckets of fresh wood chips and straw in. Franco respected my boundaries enough to sit quietly with Kiara in the front of his cage while we worked. He was reserved like this consistently; not just once or twice but weekly over the course of several months.

Here’s the final fatal flaw in their official story. During our last weeks at Tenikwa, Franco also began accepting Anna, another international volunteer who also sacrificed far too much for Karin Saks and the DPG. Franco took to Anna in an unexpected way but I was pleasantly surprised by the development. Saks’ version of events has Franco as a misogynist attacker who targets women to impress the “alpha” male; in this instance the alpha male was me. But their story fails miserably under scrutiny and in light of Franco’s new-found tenderness towards Anna. He reached out for her several times through his cage; gesturing to her to come closer; lip-smacking at her and grooming her through the wires. He was learning to be much more tolerant than the humans who unfortunately had power over his fate. He was learning to be more tolerant than he was given credit for. At that time Anna and I were the ONLY people helping him, surely not Karin Saks, absolutely not anyone at Tenikwa, not one other single person worked directly with Franco to help him improve and learn how he was supposed to be around people or monkeys.

So they killed him. They set him up to fail, and when he couldn’t live up to their ignorant expectations they killed him to cover their own liability. Going even deeper down the rabbit hole, I dare suggest that when no one, including Karin would get into Franco’s cage to clean it after I left, they defaulted to murder as their plan of action and created the attack story to use as justification for their failure. After seeing these people in action, I have little doubt they’re capable of such disgusting behavior.

Was there no other option? Of course there was. Franco would have been more than happy in his own cage with his little friend Kiara away from the other monkeys where he could see and be closer to people, and in a cage – much like a dangerous predator’s cage – which allowed for segregating the animal when maintenance was occurring. It’s not rocket science, but murder was the easier of the options for them rather than due diligence and critical thinking. And that is the single most lazy and lethal formula that I’ve seen to date from any animal facility. They murdered him in his inadequate home where he was supposed to be safe. No matter how much PR spin they attempt; the blood on their hands will remain, that I promise. Franco is yet another gentle soul lost to gross human inadequacies. Shame on you Tenikwa. Shame on you Karin Saks.

Rest in peace dear friend; you will be missed.