Here’s some deadly ammunition for the next time you need to ask “Just how stupid can people get?” Meet Harrison Williams, a 26-year-old Australian man who decided jumping into shark-filled water surrounding a massive whale carcass was a good idea. If you thought the stupidity ended there – wait for it – it gets so much better. Williams jumped off a perfectly functional boat into the water where tiger and great white sharks were feeding on the whale carcass and proceeded to climb onto the whale’s lifeless, half-eaten body so he could “surf” it.

“One of my mates said it would be pretty funny to surf the whale, so I did it. Mum thinks I’m an idiot, dad’s not too proud either. 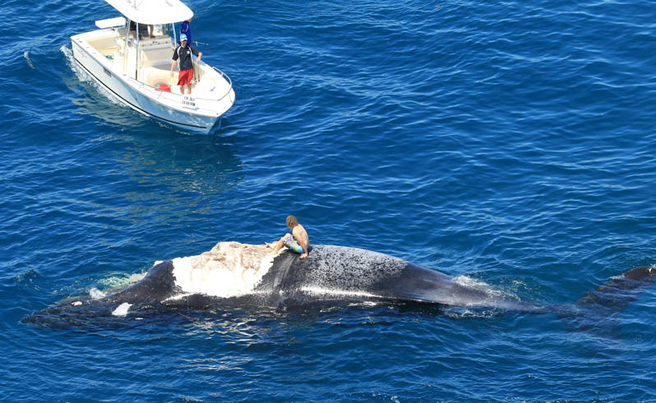 Obviously lying to media outlets to reduce the impending shit-storm of ridicule, Williams subsequently told the Daily Mail he was trying to rescue the whale. His rescue repertoire apparently included striking surfing poses for the camera while standing on the whale’s exposed blubber and innards.

“The whale looked in distress and I tried to help it. But clearly I was too late.”

“If sharks were feeding on that whale carcass when he swam over then that type of behaviour is highly risky. It potentially could have had some critical consequences, not only for the person but also for the witnesses and other people that would have had to assist. 99 per cent of the population would see that behaviour as risky.” Department of Fisheries Regional Manager Tony Cappelluti

Australian authorities considered fining the idiot but have no regulations for penalizing individuals with prohibitively low IQ’s.