Pigs are pretty awesome. And as poignantly pointed out by the Oatmeal, pigs are probably more awesome than you. Studies have illustrated pig’s formidable intelligence in the animal kingdom – ranked behind chimps, dolphins, and elephants – so why do we still torture and eat them? Because we can. Even people who profess their immense animal love simply love bacon more. And that’s a big problem for animal rights and pigs alike. Pigs are funny, happy little creatures who deserve a chance to be more than just products.

Science is always moving us forward in the search for more refined answers. Even what we think we know about animals today is being challenged by new research using surprising techniques like inter-species gaming. Most people have seen animals at play, and play with their own animals. But what if we could play with and engage with other species too? Would we start treating them all differently? Better than the type of exploitation they receive now? I sure hope so. Can games transform our relationships with animals in general?

Irene van Peer spoke about this at TEDxBrussels. She’s a Dutch product designer with a passion for game design in Hilversum. Irene helped develop a way to connect with pigs through game technology. If animal rights are to continue the advance into the hearts and minds of the public, we need these new ways to engage with animals. The only reason abattoir terror still exists is because the countless victims are out of sight where connections cannot be made. But if they were visible, just think of the changes we could affect en masse? If you had to walk past a slaughterhouse every day and saw the terrified animals trapped there – you’d likely be thinking more about this issue. More likely, you’d be having bloody nightmares. 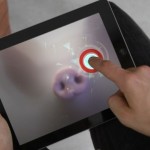 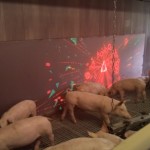 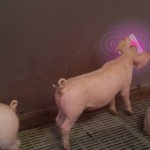 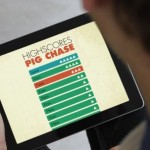 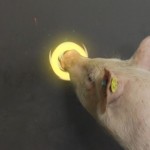 But this is about making the connection. And “Pig Chase” is the game medium where the connection takes place. The technology links a specially crafted, high-tech pig pen with someone at home on an iPad. Pigs are highly curious and respond well to light and color, so the game builds on this by having the human player establish a connection with a pig who wants to play. By synchronizing their efforts in controlling the movement of colorful balls of light, the two players score points and advance levels. If the connection between the two players is lost, it’s game over.

While I’m excited about the prospects, I’m disappointed by the hints that the technology was developed only to enrich the lives of food animals rather than to advance them out of the food production realm entirely. Giving pigs games to play before they’re slaughtered seems somewhat sadistic, especially because gaming DOES inspire connections for the players. I can’t imagine someone wanting to play such a game only to have their co-player made into sausages. Figuratively speaking, the technology could be transformative for society as a whole.

The important takeaway here though is the importance of creating an opportunity for a meeting of the minds. Such endeavors may substantially improve animal welfare and the rights movements more quickly than often labored debates between policy makers and philosophers.