This is a story about a special little person who changed my life. Her name is Hope, and she just happens to be a Vervet Monkey. Upon my arrival in South Africa in January 2013, she immediately stole my heart.

Late in December 2012, a car struck Hope and her first infant while trying to cross a busy road with their troop. The impact killed the baby immediately. Hope suffered many injuries: concussion, nerve damage, paralysis, many lacerations and a fractured pelvis. I’m thankful the sanctuary Director chose not to take the vet’s advice and euthanize Hope. She deserved a chance to fight for her life. It was an easy commitment, there was something special about her. I resolved to do everything in my power to help her get better. And so it began. 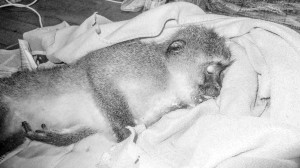 Hope became more responsive after the first week of bed-ridden care. Before that she was completely immobile and unable to eat. But now her eyes widened slightly, she began looking around yet couldn’t move her head at all. It seemed she was still concussed and required round the clock attention. We expected any improvements to be slow but at least there were noticeable improvements happening.

Our daily routine took shape. While Hope slept often, she still needed protection from her surroundings and regular cleaning. We fit her with infant diapers to keep her as clean as possible; at least that part was manageable. We administered first aid several times daily. Her bandages needed to be checked and replaced often; her wounds were open and could have been susceptible to infection, especially from the relentless insects. The many lacerations were covered with a medical barrier spray which formed a hardened crust and kept the bugs out perfectly. An ICU bed was fashioned from a human infant netted tent, with a zip up fly. Hope was as comfortable as possible given her condition; I think she actually started to like her bed. The small, enclosed space seemed to give her some security. Vervets are notoriously anxious, so keeping her calm was critical for her healing. 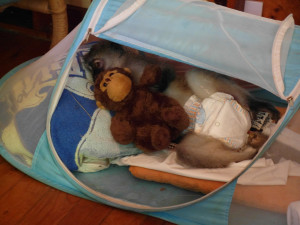 After a few weeks, the light sparked back into Hope’s eyes and her concussion subsided gradually. The glazed expression I came to expect was replaced by something far more profound: grief. She still couldn’t move much, so she lay in her small ICU tent, sometimes trying to roll herself back and forth. Hope looked at me with deep brown eyes; she knew something was wrong…where was her baby? The realization pained me, there was nothing I could do to explain what had happened. I could see she was struggling to understand her situation but she sure seemed to know that her baby was gone. Hope awkwardly tried to adjust herself to look all around her bed and immediate surroundings. The epiphany struck me harder than I could have anticipated. Hope has feelings. 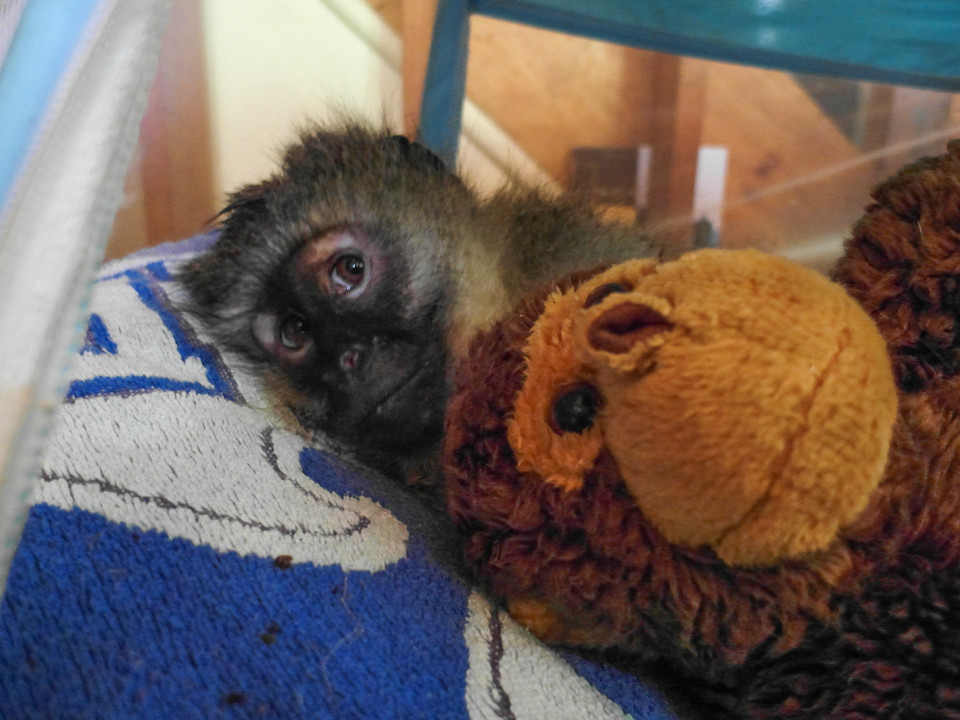 The paralysis kept her mostly immobile still; she could only move her right arm; but her hand was still totally useless. She could shuffle around in her bed only a little, but couldn’t yet crawl. Every so often she tried to kick her legs but they just didn’t want to respond yet. I tried to comfort her as best I could, with grooming and tender attention, sometimes I sang stupid little made-up monkey songs. Every brief moment when she tried a new movement was pure elation for me, I could see she really wanted to get up and active. Hope was often reaching out for something with her one working arm – usually I didn’t make the connection – and then it dawned on me.

Some people just won’t get it; I know, and that’s OK. But for those who spend enough time around animals – this won’t be a surprise. Hope had feelings and she expressed them in plain sight. All that was required was simply to pay attention.

I could feel Hope’s grief and confusion as plainly as I could from a human friend sitting across from me – it weighed heavily on my conscience. She needed something to be more at ease, and less alone, as I just couldn’t be with her twenty-four hours a day. That something soon came in the form of “Monkey”, a stuffed teddy bear almost as big as she was. As Monkey was tucked into bed beside her for the first time Hope rolled onto her side, wrapped her one good arm around him and fell fast sleep. I’m not ashamed to admit that I shed a few tears seeing how much comfort it gave her – it was in this moment I knew Hope was going to be OK.

Mealtimes were always fun. I hand fed Hope, some of the results you can see in the above video. Monkeys are messy eaters, but I wouldn’t have it any other way. During her paralysis I was Hope’s chariot, her hands and her protector; the happy deliverer of fruit and veggies. Obvious improvements continued with every passing day. When her appetite returned, it came back strong. Hope could often finish two bananas, a whole grain biscuit and a handful of green veggies in one sitting. During meals while she was on my lap, she would often reach out for my plate, and few times managed to chuck it right off the table. I can’t tell you how much of a relief it was to see her start showing some real monkey personality – even if she was trying to steal my dinner.

She still wasn’t talking much yet but that would come in time.

As you’re bound to realize, Hope is the special someone who taught me how to help people of all kinds. She taught me to give up my ego, to take things in stride while covered in monkey shit, and to just do what needed to be done to help at a moments notice. Please join me as Hope’s story continues through inspiration and heartbreak in South Africa. This is a story that needs to shared.